I’ve been a parent for seven years now. That’s really not that long but there is one thing I’ve learned in those years and that is that as a parent, you have to admit you’re wrong a lot. (Or maybe that’s just me and I screw up a lot?) Now I’m not saying you have to issue a full-on mea culpa with every damn whoopsie. Oh God no, that would be a sign of weakness which could drive the little hellcats to eat you in your sleep. No, I’m just saying there are a lot of times when it’s really important to admit to your kids that you were wrong. I’m having one of those today.

For 2 ½ years I’ve spent most of the day alone with my silent sidekick, the Nugget. He’s the Teller to my Penn, a funny little dude with perfect comedic timing who fabulously compliments my surly nature without uttering a word. Back when his brother was my 2 year-old sidekick he was the opposite. He had the vocabulary of a 50-year-old college professor and talked like a damn Republican on a filibuster. I was accustomed to narrating our day and getting full running commentary in return. I often felt like I was with a really, really short adult. Because of his vocabulary I probably gave him more credit for understanding things than he probably deserved but it’s hard to remember a kid is only 2 when they can out-talk you in two languages. But as much as I’ve overestimated Number One Son, I’ve underestimated my Nugget.

Because he’s got one ear and is partially deaf and had a lot of health issues in his first two years, I’ve always babied Nugget. (I’m also old and he’s my last so that didn’t help either.) In addition to his bum kidney and missing ear, he has Apraxia of Speech which means that so far, he’s got no verbal communication and when you’re a super verbal mom with a kid that can’t speak your language, it’s easy to think they’re not understanding anything either.

Think about it, when people meet someone who doesn’t speak their language, they tend to speak louder, slower and more simplisticly to help them. When the foreigner doesn’t respond, it’s assumed that person didn’t understand and may not be that bright. I know, it happened to me all the time when we lived in Turkey and I was learning the language (I wanted to hand out cards that said, “I’m really smart in my own language.”) and it happens to my husband, The Turk, every time he opens his mouth with his thick Turk accent here in middle America and he’s a freakin’ engineer. (Full disclosure- my mom only stopped speaking loud and slowly to him last year and he’s been around for about ten years.)

Today I realized I’ve been giving my Nugget the foreigner treatment. Thanks to an amazing woman we met though our Deaf Mentor program, we started learning ASL about six months ago and for a toddler, Nugget’s really picked it up fast. He signs all his basic needs, his colors and is working on his numbers. He signs along with the songs on his favorite show, Signing Time, as well as signing animals and other nouns about town. So while the little dude can’t talk, he can sign like a champ. And while he’s been mastering sign language, I’ve been half-assing it. I sign  and I work  to learn them but I still push my verbal language on him. I don’t always remember to sign what I say and I don’t always have the patience to try to decipher what he’s signing to me. Crappy right? I narrated everything to his brother in both English and Turkish when he was little. I spent hours working on pronunciation with him and listened to what he had to say. Sure, maybe some of this has been second child syndrome (Ain’t nobody got time for crap with child number 2). But I think a lot of it has been that I just didn’t understand that ASL is his language and I need to accept that and communicate with Nugget in his language.

Last night he kept doing a bunch of signs that didn’t really make sense to me so I brushed it off but this morning he did the same sequence again. Me, Santa, football, hat, want. It hit me like a brick. “I want Santa to bring me a football helmet.” I asked him if that’s what he was saying. He signed yes, waved his hands in silent applause, hopped up and down and giggled and giggled. Mom finally understood.

And I just cried. I sometimes forget that the little guy in there is smart and amazing and not a baby anymore. He’s a big guy who loves football, understands how Santa works, has a rapidly growing vocabulary and is now making sentences.

So my darling Nugget, I’m sorry. I was so wrong. You are really smart in your language and I’m a dumbass for expecting you to adapt to mine instead of using yours. From now on Mom is going to give you the same treatment she gave Big Brother and just like I worked to learn your father’s language, I will work to learn yours. Maybe eventually, you will be able to use my language but even if you never do, it’s ok because you are absolutely brilliant in your own language. (And P.S. I’m going to get that message to Santa STAT!!!) 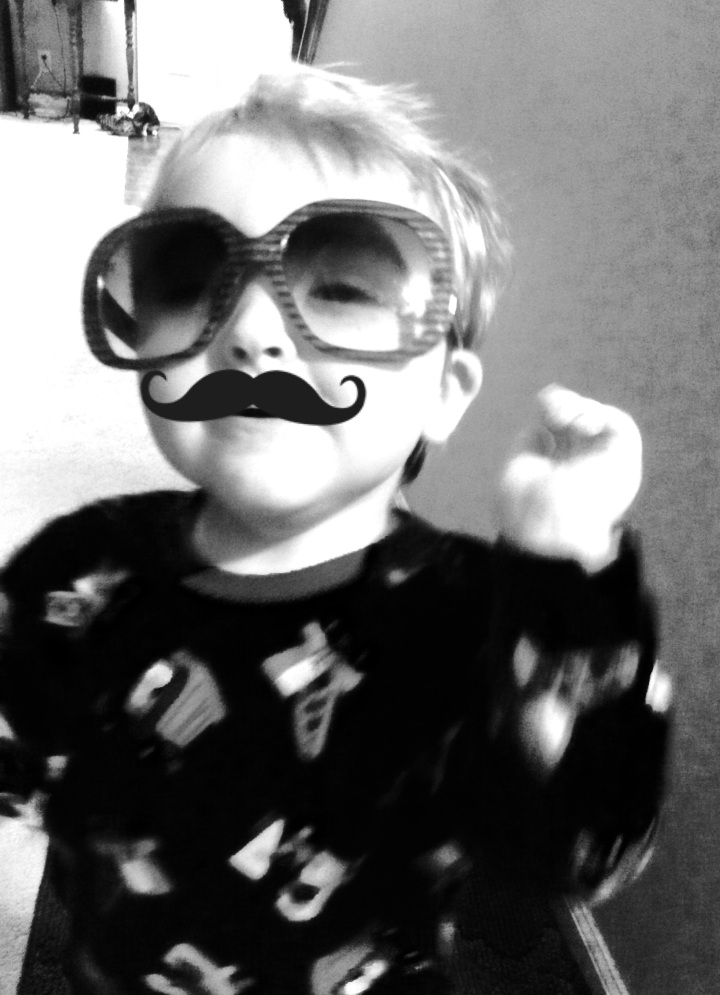