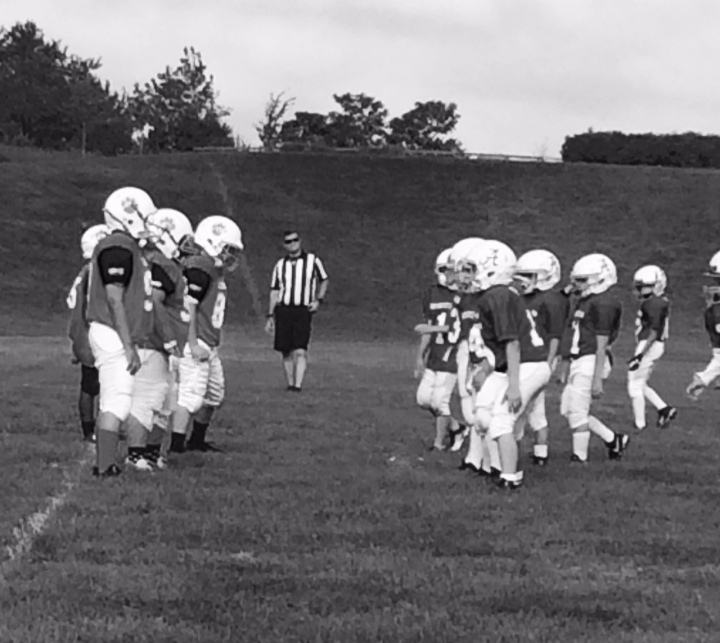 The night before any big game is the perfect breeding ground for a serious case of the jitters. Last Friday in our house, the jitters didn’t just pop-by to visit, but they settled in at the dinner table, somewhere between the tuna melts and green beans.

“Big? How big can they be?” I countered. “This is a 4th grade league. I doubt that 4th graders from the next town over are really that much bigger.”

“Don’t be a wuss. Get in there and take ‘em down and don’t come home until your pants are covered in grass stains.”(Though I’m a suburban mother, my inner spirit seems to have become that of a washed up high school football star.)

Because my husband, the Turk, occasionally carries the sanity in our union, he quickly chimed in and overrode my input, “If guy is too big you just hit his pads and run away. Got it? Run away so he not crush you. You can beat him. He will be slow because he is fat so just run away. You don’t want fat guy fall on top of you. Ok?” As if the Turk’s instruction was not enough, he punctuated it with a reenactment in the middle of the kitchen floor using 4 year-old Nugget as a visual aid.

“Run away?” I scoffed. “Yo, this isn’t your futbol where you fake a booboo when you need a rest. This is American football where we fight like the violent, obese people we are.”

“It is better he look like wimp than get crush by fat Hoosier.” -Quote, The Turk.

The Turk did have a point, Hoosiers – the government mandated term for the native people of Indiana- are not a small people. (For reals, I have 6th graders that tower over me and while I’m no giant, I wear really big shoes.) However, I’d seen all the teams in our burb’s 4th grade division and with the exception of a couple 5 footers, they were all regular sized 4th graders. We also have a 95-pound ball carrier weight limit, (I was well aware of this because my offspring and I held our collective breath at weigh-in hoping that with pads, he’d clear it. Like is mother, he’s short but he’s solid.) and 98% of the league had cleared it.

“Relax, Coach was probably just trying to psyche you guys up.” I assured him.

The Turk chimed in with another tip from his runt playbook. “But if your mom is wrong, remember, you are Turk and do what I say. Hit, run away, then jump on at end like you there whole time.” His father added.

At 7:30 Saturday morning, after our ritual 20 minutes of searching for cleats, struggling into pads and the ‘protect your goods’ check about all things manly, we were ready for his pregame drop-off.

While Number 1 and his team of 4-foot bobble-heads warmed up, the rest of us had time to grab a coffee before the coin-toss. After struggling 6 miles across wet grass like a Sherpa with chairs hanging off my back and a screaming Nugget, hostile about spending another day doing something for his brother, hanging from my front, I was ready to plop down and enjoy a little Saturday morning football magic. It was then that the Turk pointed out we were on the wrong field.

“This cannot be his game.” He said.

“Of course it is. We’re the red guys and there he is.” I gestured toward the cutest lineman in the universe…(known to the rest of the crowd as white-helmet-bobble-head-number-14)

The Turk countered with his own point toward the middle of the field where the coin toss was on. “If this our game, who those men?” On one side of the ref were two white-helmet-bobble-heads in red jerseys appropriately 4’ 6ish and scrawny, but counter to them were two man-sized players in orange jerseys who may or may not have been able to vote in the last election.

“WHAT ARE THOSE?” I screamed. “WE’RE PLAYING GROWN-ASS MEN!”

I glanced down the sidelines to see that the two jolly orange giants mid-field were not anomalies. Their entire line-up was comprised of so-called 4th graders who could likely slap on a fake mustache and stop off at any watering-hole for a post-game highball.

“Oh hells no.” I yelled, “This cannot happen. This cannot be legal.” I stammered but before I could rush the field and throw a very un-football hissy fit, the whistle blew and the David V. Goliath Saturday saga had begun.

The Turk and I scanned the field and high-fived when we found our kid. Two parents have never been more excited to see their kid warming the bench. Our hopes were soon dashed as the starting offensive line took the team, and there in the path of calamity was my baby, Number 14.

My little lineman, being one of only two on his team over the 90 pound mark, was assigned the task of covering a kid that could best be described as the 9 year-old embodiment of Jabba the Hutt. Baby Jabba, we would soon learn, already had a nickname. Ten feet away from me, a family of larger beings cheered and screamed for their son/my son’s nemesis – Sugar Foot. “Come on Sugar Foot! Hold that line!!!!” the mother yelled and before struggling into a 3-point stance across from my son, Baby Jabba waved and possibly blew a kiss. My first-born was up against a fat man named Sugar Foot and all I could do was pray Sugar Foot didn’t fall on him.

Play after play Number 1 Son faced off with Sugar Foot and, after realizing early on that simple physics would prevent him from stopping an object twice his size, my son decided to take his father’s advice. He gave Sugar Foot the old hit and run, but made sure to jump on top of any available body pile to make it look good.

Meanwhile on the sidelines I chanted my mantra – “Fat man don’t fall on my baby, fat man don’t fall on my baby.” It was like a crime scene and the Turk didn’t make it through. He gave up early on, “I cannot watch.” and left under the guise of taking Nugget for a walk. “Call me from emergency room.” I, however could not look away. A good football mom never leaves the a death match unfolding before her because he might have to run on the field and pull a fat kid off her baby.

In the end, the fat guys were too slow and we beat a team twice our size. Except for a few bruises, Number 1 walked away unscathed physically. Nugget, however, saw an opportunity. Everytime he finds his brother in a vulnerable position, I hear him scream “HERE COME SUGA FOOT!!!!” before enacting a full body slam. Well played kid, well played.